Guinea pigs are prey animals that developed certain traits to escape potential danger. Guinea pigs rarely close their eyes, even when they sleep. Most guinea pigs sleep with their eyes wide open.

These tiny and fragile cute creatures have plenty of little quirks that made them so lovable!

There are many things that you, as a new guinea pig owner, need to know, and you might also want to learn how to interpret the expression on your guinea pig’s face!

So, let’s see whether guinea pigs close their eyes and whether they sleep with their eyes closed (or open).

Before we continue, check out these top guinea pig products: 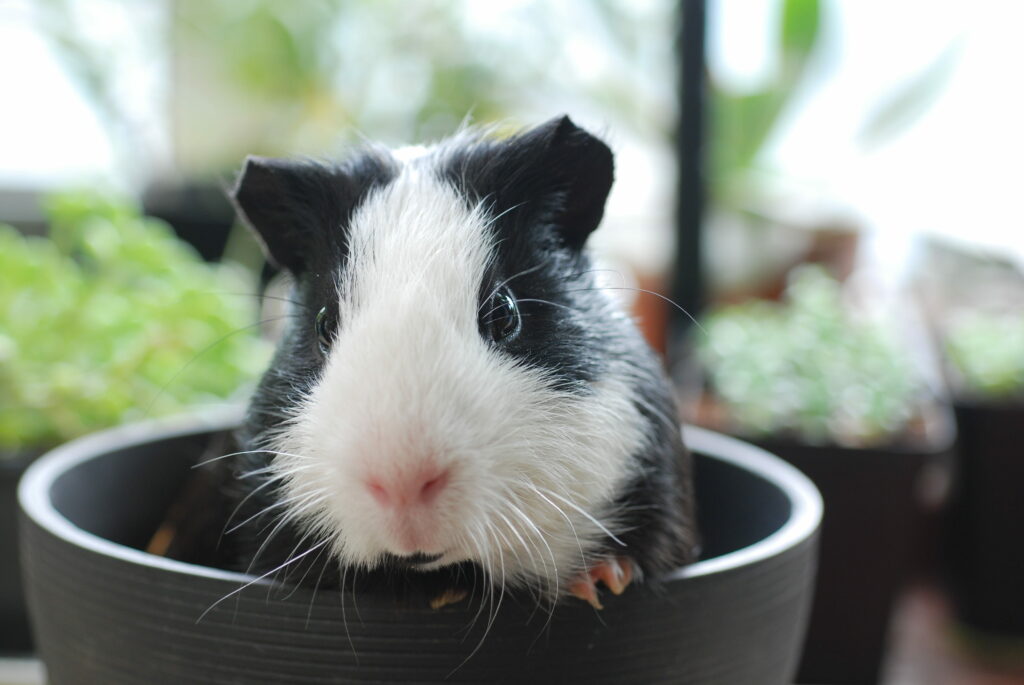 Do Guinea Pigs Close Their Eyes When They Sleep?

These small animals normally sleep with their eyes open.

Commonly, you will know that a guinea pig is asleep if it is standing still, with eyes open.

Guinea pigs were prey animals in the wild, so they learned how to adapt to the harsh environment and escape when in danger.

They sleep with their eyes open and also have developed their senses of hearing and smell to protect themselves.

However, sometimes, a guinea pig might feel safe, peaceful, and relaxed that it can briefly close its eyes and enjoy the moment.

For instance, in this video, you can see Sandy who feels safe and protected in its habitat so much that this cute guinea pig sleeps with its eyes closed and for much longer than guinea pigs usually do.

In the wild, animals are either predators or prey.

Bears and deer, sharks and guppies, and the food chain are what drive evolution and animal behavior.

This is true for all animals, but the results of this struggle for survival are visible in the way guinea pigs behave.

Guinea pigs are prey creatures; they are used to being on the bottom of the food chain, serving as food for creatures like felines, canines, birds of prey, and humans.

Because guinea pigs were prey creatures, they had to be as alert as possible.

Whenever they would close their eyes, guinea pigs were in danger.

That is also the reason why guinea pigs blink rarely, only when they need to moist their eyes and remove a speck of dust.

Not only guinea pigs can see in color, but they can also see 33 images per second (while humans can only see 22).

Also, guinea pigs have a 340-degree vision, which means that they don’t have to move their head to see if anyone’s approaching them.

However, even that wide eyesight wouldn’t be useful if guinea pigs wouldn’t keep their eyes open.

By closing its eyes, a guinea pig might turn into prey instantly.

And when you’re dealing with predators as swift as hawks it only takes a split second to go from living a happy and peaceful life to being someone’s dinner.

Things are the exact opposite for guinea pigs, who are smaller than most of the animals around them.

This is something that helps to explain many of their behaviors, including their sleeping habits.

It lasts from a few seconds to a few minutes, and they sleep with their eyes open.

Also, because guinea pigs are active at night, many people believe that guinea pigs can see in the dark.

However, that is not the case.

Guinea pigs have very poor eyesight despite all the advantages that we just listed.

That’s another reason why they learned to rely on their sense of smell and hearing.

So, by sleeping with their eyes open, they could only see the immediate danger but other senses have helped them become fully aware of the danger just on time to escape.

Research has shown that there is a marked difference between the way predator and prey animals view the world but also the way they sleep and their sleeping schedule.

Scientists realized that the shape of an animal’s eyes can reveal whether it is a predator or prey and its place in the food chain.

One look into the eyes of a guinea pig is all a scientist would need to know that it is a quintessential prey creature.

Guinea pigs are always on the alert for predators, even now, when they are living with you, comfortable in their habitat, in peace.

Don’t take it personally; it’s simply a part of their nature and instincts.

When guinea pigs sleep, their open eyes allow visual information to filter into their mind, giving them a chance to react to changes in the world around them faster than other animals can.

Yes, guinea pigs can blink and they have to blink to protect and moist their eyes.

Eyelids protect the eyes of your guinea pig and help remove dust and dirt.

And that’s exactly when they blink.

A guinea pig blinks rarely compared to humans and it does so unconsciously, to most the eyes and removes dust or dirt.

Guinea pigs blink at different rates, which depends on their conditions and health.

And, interestingly, a guinea pig that feels safe might blink more often.

Can Guinea Pigs Close Their Eyes?

Yes, guinea pigs can close their eyes even though they don’t do it very often.

Guinea pigs don’t feel the need to close their eyes as often as other animals.

They rarely blink and rarely close their eyes, but they do blink and can keep their eyes closed if they want to.

The first prerequisite is that a guinea pig feels safe and protected.

You shouldn’t do anything to try and force your guinea pig to close its eyes, but you can keep your eyes open and watch to see whether you can catch your pig letting down its guard.

Are Guinea Pigs Unique in the Way They Sleep?

No, guinea pigs are not unique in the way they sleep.

If you think about all the living creatures on this planet, you’ll discover that many species don’t have eyes that operate in the same way as our eyes do.

Although not many mammals sleep with their eyes open as guinea pigs do, most species on this planet aren’t mammals.

To begin with, insects are some of the most common lifeforms on this planet and they don’t have eyelids.

You’ll also find that fish don’t have true eyelids either and also sleep with their eyes open.

After all, we may need to blink because our eyeballs start to feel dry, but that’s a problem that no fish will ever have.

You’ll also find that snakes and many lizards don’t have opaque eyelids as we do.

So, you see, the guinea pig’s behavior might seem strange to us as humans but if other animals, fish, and insects could talk, they would probably say that humans seem weird to them.

They would be amazed that a species could shut itself off from the dangerous world around them so tightly every night, unable to swiftly react to the possibility of immediate danger.

What Does It Mean When a Guinea Pig Sleeps With Its Eyes Closed?

So if you have a guinea pig that never seems to sleep because you can’t catch it with its eyes closed, you don’t need to worry.

A guinea pig can get restful sleep and be comfortable with its eyes open without having to close its eyelids.

Now that humans have become a sort of apex predator that was almost unimaginable just a short time ago, it makes sense that we’d have difficulty understanding creatures like guinea pigs that are pretty much purely prey.

If you can understand why guinea pigs are so afraid then you’ll have an easier time empathizing with them and putting in the work necessary to calm and relax them.

So if you see that your guinea pig is sleeping even though its eyes are open then you have no reason to be alarmed.

But the same goes for seeing your little guinea pigs sleep with their eyes closed.

While it’s common for guinea pigs to sleep with open eyes, that doesn’t mean they can’t sleep with their eyes closed.

You can see it as a serious compliment if your guinea pig gets some real shut-eye around you.

That sort of behavior of a guinea pig shows a high level of trust and relaxation.

The top guinea pig products on the market:

Though guinea pigs are crepuscular animals, active day and night, they have to sleep just like all other living beings.

Guinea pig’s eyes also need to moist and remove any speck of dust that falls into them.

Therefore, guinea pigs can shut their eyes, although they do it so fast that you might miss the moment.

Also, they rarely sleep for longer than a few minutes, and even then they keep their eyes open.

As prey animals, by keeping their eyes open even in their sleep, guinea pigs were capable of escaping their predators.

However, even when guinea pigs sleep, they do so with their eyes open, and you know that your pet guinea pig is asleep if it is standing still and quiet.

A guinea pig is sleeping with its eyes closed only when it feels completely safe and fully protected from any harm.