Guinea pigs are small mammals that seem active throughout the day and night. Many people believe that piggies can see in the dark. Can they? How do guinea pigs see?

Guinea pigs have a poor depth perception but they can see almost 360 degrees due to the position of their eyes. They can see above and behind them. Although guinea pigs cannot see a predator approaching from afar, as prey animals, they can still quickly react due to their extraordinary hearing and reflexes.

Guinea pigs need to live in pairs to live a longer, healthier, and happier life.

Having a guinea pig as a pet is a long-term commitment, and there are details you need to know.

Guinea pigs have outstanding spatial awareness and an incredible sense of smell and hearing.

Therefore, to make your guinea pigs feel happy and safe, install covers and tunnels in their enclosure so they can have a place to hide and explore when they feel like playing.

However, there are also things you don’t need to know to care well for your guinea pigs, but you are still interested to learn them.

So let’s see what we can learn about the vision of guinea pigs and whether they can see in color or in the dark.

Before we continue, check out these top guinea pig products: 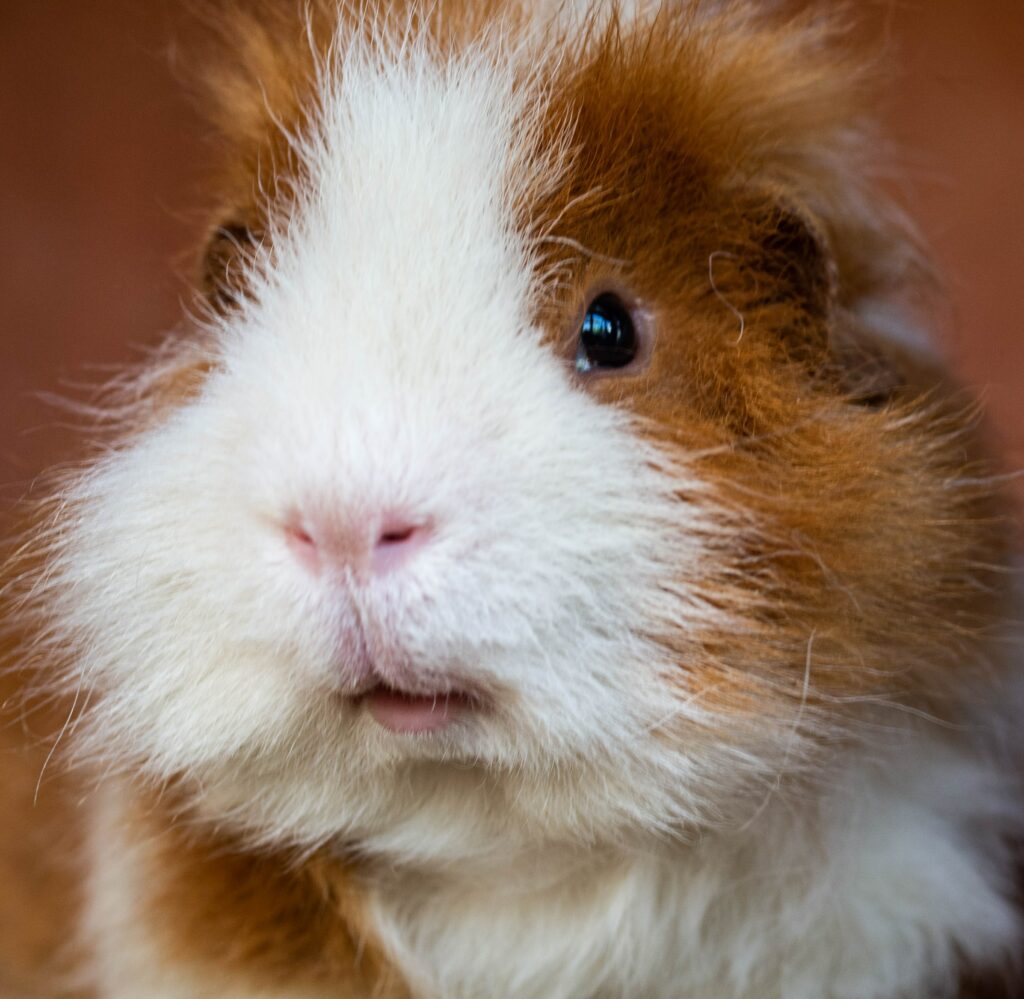 How Do Guinea Pigs See?

A guinea pig’s eyes have a perfect symmetrical visual positioning that enables guinea pigs to see at a 340-degree range.

The position of guinea pigs’ eyes allows them to see all that’s coming their way and also see whatever is coming from the side.

Moreover, the shape of their head allows them to see above and behind themselves!

Basically, they don’t have to move their head to notice danger.

The eyes of guinea pigs are powerful sensors that allow them to quickly sight predators and determine their escape routes right before they are attacked.

That is also one of the reasons why guinea pigs react dramatically to any sudden movement coming from you or your family members.

However, this doesn’t suggest that guinea pigs have better eyesight compared to other animals. On the contrary, you could say that they have poor eyesight.

Guinea pigs do have a better color vision compared to cats, dogs, and most other animals.

Guinea pigs see 33 images per second, which is much more than people do.

This ability prevents them from blurriness when they turn their heads quickly.

Humans see 22 images per second and do not have the same degree range of vision.

So, who has better eyesight?

All jokes aside, here is what makes people believe that guinea pigs cannot see very well.

Guinea pigs see only as far as 3 to 5 feet and they don’t see details.

Still, they will always react to visual stimuli such as color, time of the day, spotlights, LED lights, and the colors and movements that come from your TV or phone screen.

Yes, as research has shown, guinea pigs have dichromatic color vision and they can see colors.

Therefore,  they are not color blind.

In scientific studies, scholars conditioned guinea pigs to check if guinea pigs respond to colors and concluded that they will always approach the bowl of a certain color knowing that the food should be in that particular bowl.

Again, we have to remind that guinea pigs don’t have a very clear vision when looking at distance, they see more images per second and the position of their eyes and the shape of their head allows them to see at a 340-degree range.

Plus, they distinguish colors; yet, overall, guinea pigs have poor eyesight.

Can Guinea Pigs See In The Dark? 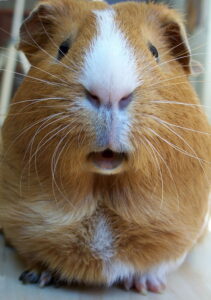 It remains unclear whether guinea pigs see in the dark as well as they see during daytime or even better.

What scientists do know, however, is that guinea pigs have a good perception of colors and can distinguish them, they have poor depth perception and cannot see far.

Therefore, their eyesight is limited in a way.

Also, experts believe that guinea pigs rely on their memory and learned escape routes to find their way and see in the dark.

So, if you find your guinea pigs running around at nighttime, they are active because they feel safe and know their habitat well.

Do Guinea Pigs See When They Are Asleep?

You may never or occasionally see your guinea pigs’ eyelids because guinea pigs rarely close their eyes.

Also, they take super-short naps that their owners barely notice; you will know they are asleep if their bodies are still and peaceful.

These naps happen throughout the day and night and always last for seconds, so you might believe that guinea pigs never sleep.

Yet,  guinea pigs sleep. They are crepuscular animals. 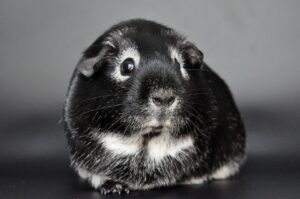 A guinea pig rarely closes its eyes and rarely blinks.

However, some guinea pig owners see their guinea pigs standing peacefully with their eyes closed.

That’s also perfectly normal, although it rarely happens because guinea pigs rely on their instincts as prey animals that need to be constantly cautious.

If you see a guinea pig with its eyes closed, you should know that this small animal feels very relaxed, comfortable, and safe.

Likewise, it is also normal for them to sleep with their eyes open.

So, yes, guinea pigs can see when their eyes are open, even when they are sleeping.

What Are the Limitations in the Guinea Pig Vision?

Guinea pigs can run around in the dark, be very active, and keep you up if you need perfect silence to sleep well.

For that reason, many people believe that guinea pigs can see in the dark, which is not entirely true.

Also, they are happy when they see you and show it openly, so you know that they can see you in the daylight.

That is also not entirely true.

A guinea pig’s vision has limitations.

They can see 33 images per second which is much more when compared to humans.

We can only see 22 images per second.

Guinea pigs can see colors and they also have a much broader vision compared to humans (and many other animals).

Yet, guinea pigs cannot see far, so the depth of their vision is impaired.

To move around freely during the day and night, and to recognize you when you’re approaching, they rely on other senses, such as the sense of smell and hearing, and their good spatial memory.

Can My Guinea Pig See My Phone Screen?

Yes, your guinea pig is able to see your phone screen, but most likely it will exhibit interest in the light of the screen, not so much as what is going on on your screen.

A guinea pig will be attracted to fast images and lights and that can keep their attention.

They won’t know what’s going on on the screen of your phone.

Don’t forget that they mostly rely on their sense of smell and hearing, not on their eyesight.

What Are the Common Guinea Pig Eye Diseases?

A healthy guinea can suffer from many eye diseases and problems that require intervention.

These range from a scratched cornea to corneal ulcer, various infections, and tumors.

Often, you will have to seek help, and the vet will treat your guinea pig’s eyes depending on the diagnosis.

You will most likely notice the following signs and symptoms:

If you notice any eye issues with your guinea pig’s eye(s), schedule an appointment with the veterinarian because eye problems can be serious.

If left untreated, they could cause blindness in your guinea pig.

Sometimes, something in your guinea pig’s cage, such as hay or bedding, can irritate their eyes.

Also, a fight with another guinea pig can end up with the guinea pig’s eye scratched.

These scratches or irritations can cause a corneal ulcer, which is a defect in the cornea that’s very painful.

You may see cloudiness or redness in the eye as soon as you notice that your guinea pig paws at it/rub it, or keeps it closed.

Often, this pain will make your guinea pigs stop eating, which triggers other health problems.

The vet will prescribe ointments such as antibiotics or specific ones, made to heal ulcers.

In case that doesn’t work for your pet, the vet may decide to take other approaches.

Another type of eye problem that commonly happens to guinea pigs is an infection of the eye(s), caused by irritation or exposure to bacteria or fungal spores

These infections need to be treated with antibacterial or antifungal medications.

Should I Treat My Guinea Pig’s Eyes on My Own?

Although it may be tempting, never try to treat your guinea pig’s eyes on your own.

While you’re still an inexperienced guinea pig owner, always consult a vet who will guide you on how to alleviate your pet’s problems.

Can a Guinea Pig’s Teeth Cause Eye Problems?

Believe it or not, your guinea pig’s overgrown teeth can also cause eye problems.

The roots of incisors (guinea pig’s front teeth) can grow into a pathway between the nose and the eyes and block the pathway.

The vet will perform a test and may X-ray your pet to confirm the diagnosis.

In case the eye problem is caused by your guinea pig’s teeth, the vet will decide whether your pet needs extraction surgery.

Tumors are also a possibility if you notice anything is wrong with your guinea pig’s eyes.

Although there’s no treatment for a tumor behind the eyes, the vet will treat the problem symptomatically.

How to Prevent Eye Problems in Guinea Pigs?

You cannot prevent every problem, but surely you can maintain your pet’s cage clean.

By regularly cleaning your pet’s cage, you will prevent the growth of bacteria.

Also, if you have more than one guinea pig living together, break up any fighting to prevent eye injuries.

Always pay attention to changes in your guinea pigs’ eyes and take them to the vet as soon as you notice anything unusual.

Here are the most popular guinea pig products on the market:

Considering their vision/eyesight, guinea pigs are superior to humans in many ways but are also inferior in others.

A guinea pig doesn’t have to move its head to see above, below, or notice a danger approaching from the sides.

Guinea pigs can see colors (but we don’t know how successful they are in distinguishing shades!) and see many more frames per second than we do.

Yet, they can’t see in the dark. Overall, we’d say that guinea pig vision is poor mainly because of their poor depth perception.

The poor depth of their vision doesn’t allow them to see far, so they have to rely on their other senses, sense of smell and hearing, to confirm what’s going on around them.