Guinea pigs are small mammals that need much attention and care.

What is always important is to provide your pet guinea pigs with the best living conditions for the survival of the mother and the babies.

You don’t have to be a professional breeder, but care and knowledge are significant.

Before we continue, check out these most popular guinea pig products: 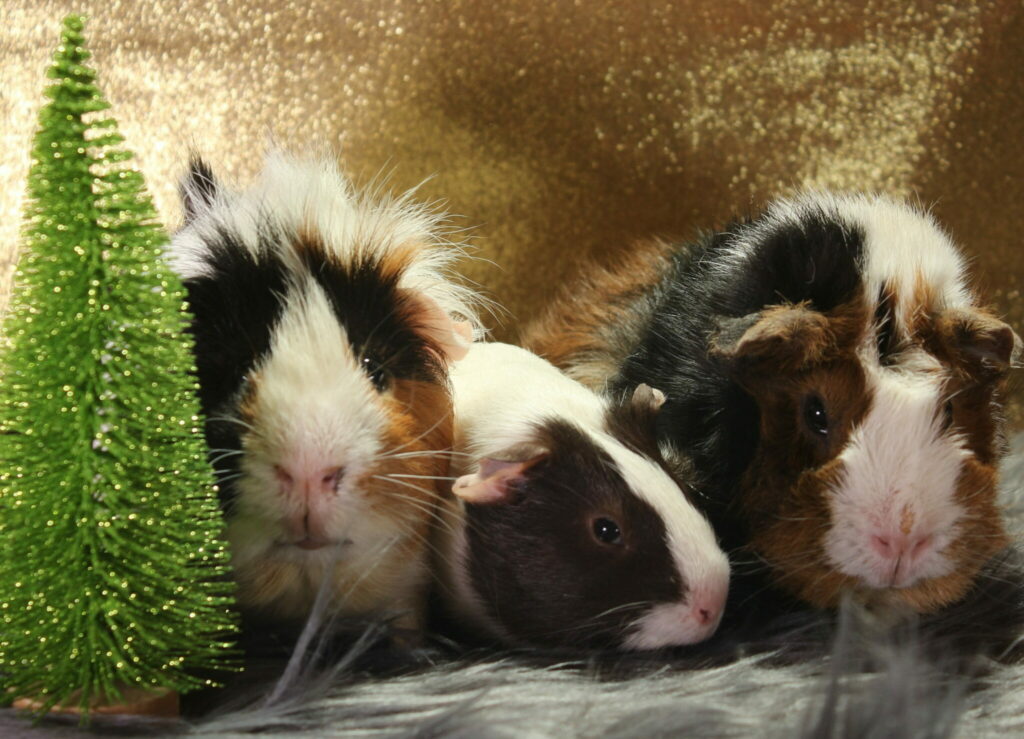 How Do Guinea Pigs Reproduce?

Guinea pigs are social animals and, if you own one guinea pig, make sure to get at least one more of the same sex so it wouldn’t be alone and possibly suffer from depression.

Although you might be spending a lot of time with your small animal, and may even register it as your emotional support animal, your guinea pig needs a friend that belongs to the same species.

A piggy also needs a friend who speaks the same language and has the need to spend time with their own kind, just like all humans do!

There are reasons why opposite sexes are kept together.

One of those reasons is that, in mixed-sex groups, they will mate and quickly increase in number, when they are not even a few months old!

So, either you will keep your guinea pig with a friend of the same sex or you will neuter the male to keep them from reproducing.

Another option you might consider is to spay the female guinea pig but it is a much more difficult procedure.

Another thing you have to know about guinea pigs is that they feel and function the best at temperatures between 65-80°F (18-26°C).

If the temperature goes above 80°F (27°C), guinea pigs, especially overweight or pregnant, might have a heatstroke.

Here are other things to consider before you decide to let your guinea pigs reproduce.

Pregnancy is difficult for guinea pigs.

On average, about 20% of guinea pigs die while giving birth to their babies.

Those who survive may cope with complications that can be very painful to them and costly to their owners.

If you decide to breed your guinea pigs, make sure to separate the babies in time because baby male guinea pigs can impregnate their mother as soon as they reach sexual maturity which is when they are only three weeks old.

Also, make sure to have enough space and separate cages for your guinea pigs as you will have to separate the brothers to prevent fighting among themselves. 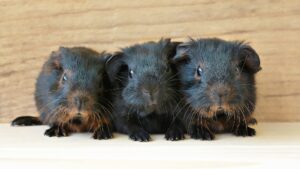 However, at that age, your guinea pig is too young!

Compare it to teenage pregnancies in humans.

Although teenagers can give birth, their bodies are still not completely developed.

For that reason, don’t mate your guinea pig before she turns at least 3 months of age and weighs at least 400 gr.

Ideally, you will wait a little longer than this.

For the breeding to be successful, the female must reach full sexual maturity.

A female guinea pig’s heat cycle lasts for 16 days on average (between 14 and 17 days).

However, during that time, she will be interested in copulating with the male guinea pig for only about 8 hours.

Additionally, you will easily notice when your female guinea pig is ready to mate.

She will curve her spine downwards and keep her rear end elevated.

If you are keeping her with other female guinea pigs, you may discover her mounting the friends she is living with.

If you decide to allow your pets to breed, do the following:

Also, purchase new and more toys if you think there aren’t enough for the parents and the newborns.

Clean the cage and its surroundings every day to keep your pets, both female and male guinea pigs, in good health. 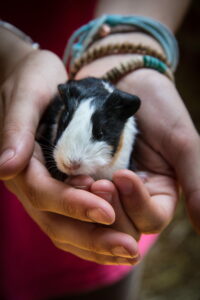 A female’s heat cycle lasts between 14 and 17 days and there is only a 24-48 hour chance window for breeding during which the female will show interest in her partner for only about 8 hours in total.

It will take from nine to ten weeks before your guinea pig gives birth to her babies. She will give birth anywhere from one to six young, although three to four is the average.

Your guinea pig can double her weight.

To care for her properly, replace timothy hay with alfalfa and provide much more water than usual, as she will drink a lot more.

How Will I Know My Guinea Pig is Ready to Deliver Her Babies?

The gestation period lasts for 68 days on average.

About a week before your guinea pig gives birth to her babies, you may notice a slow widening of the pelvis (just in front of the external genitalia) that increases to over 2.5cms shortly before delivery.

Transfer the sow to a nursery before she starts giving birth.

She needs to be separated from other guinea pigs while she’s nursing the newborns.

Usually, it will take about an hour before your pregnant guinea pig delivers her babies without any complications.

There is an average of five minutes between the arrival of each guinea pig baby.

However, throughout their breeding lives, abortions and stillbirths are common.

After giving birth to her babies, let the new mom clean and groom her babies and don’t interrupt this bonding cycle.

Guinea pig mothers need to nurse their babies at least until they turn 2 weeks of age.

Also, do not handle the litter and the sow for at least 24 hours.

After that, you can handle the babies to allow them to get used to human presence and contact.

Baby guinea pigs will run around soon after birth.

They have hair, and teeth and come to this world with their eyes open.

Also, they can start eating solid food within hours after birth, although they will rely on their mother’s milk for a while.

Plus, if you see the mom eating the afterbirth, don’t be upset, as it is normal.

Additionally, the new mom can eat her babies after she has given birth.

Although it rarely happens, it still can.

What Should Pregnant Guinea Pigs Eat? 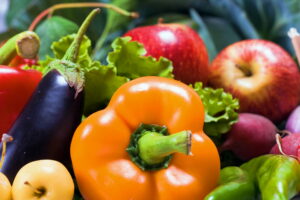 The pregnant guinea pig needs three times as much vitamin C as she normally does.

Be careful though, as vitamin C degrades quickly in water.

Therefore, provide your pregnant guinea pig with foods rich in vitamin C such as kale, parsley, broccoli, cauliflower, and cabbage.

Your female guinea pigs might eat three times the usual amount of food that they eat when they are not pregnant.

A cup of Brussel sprouts and dandelion greens provide around 200 mg of vitamin C, just enough for your pet’s daily needs.

Likewise, make sure that you continue feeding alfalfa to the mother instead of the regular timothy hay you are feeding other grown-up guinea pigs.

What Are the Possible Complications During a Guinea Pig Pregnancy?

The average gestation period for guinea pigs is 63 days.

If it continues over 70 days, you should immediately call a vet, as it’s highly likely that baby guinea pigs will be stillborn.

Just like most other rodents, the sows can mate within hours after giving birth to their babies but you should never allow it to happen.

They need time to recover before a new pregnancy.

If your guinea pig has over three or four piglets, foster them to another female.

Guinea pigs have two nipples to suckle their offspring, so you might talk to a veterinarian to consider the best option for the mother and her babies.

When 2-4 fully developed newborn guinea pigs come to this world, they are relatively large.

They come fully furred, with open eyes, and can eat solid food hours after their birth, although they will still nurse.

If the babies are too large, they will have difficulty getting through the pelvic canal.

In some cases, the mother’s pelvic bones can be relatively immature and flexible, which makes the situation easier.

However, large offspring predispose the mother to pregnancy toxemia.

In the early stages of this condition, female guinea pigs lose their appetite, experience muscle twitching, and fall into a coma.

Therefore, pregnancy toxemia can be deadly for the mother.

Immediate attention of a vet can save these small animals, but you can also do much to reduce the possibility of your pet’s suffering.

Provide the pregnant guinea pig with plenty of water and high-calcium greens throughout her pregnancy.

Ideally, you will consult a vet throughout your guinea pig’s pregnancy to prevent all problems that can be prevented.

Other pregnancy complications may be triggered by the health conditions of the mother.

Dystocia is a condition quite common in a certain animal species that slow down the delivery process and jeopardizes the mother and her babies.

The tough fibrous cartilage which joins the two pubic bones is quite stiff and doesn’t expand as much as it should.

Therefore, monitor your guinea pig’s appetite, activity, and stool, and watch out for anything unusual or different.

Of course, if you notice something out of the ordinary, contact a veterinarian.

How to Care for Baby Guinea Pigs?

Separate the newborn guinea pigs from their mother within the first two to four weeks, when they weigh between 150 and 200 grams.

One of the main reasons why you want to do that is that reach sexual maturity very quickly.

They can start mating among themselves (and with their mother) as well as other mature guinea pigs in the enclosure.

Remember: you want your guinea pigs to live in a community, but that community should consist of same-sex guinea pigs or females and a neutered male guinea pig.

We don’t recommend keeping male guinea pigs in the same cage as they can get very competitive and violent towards each other.

It is not difficult to hand-rear them if needed, as they can eat solid food within hours after their birth.

Breeding guinea pigs is not difficult as all you have to do is join the male and the female guinea pig and let nature do its work.

However, every guinea pig pregnancy comes with life-threatening risks both for the mother and her babies.

Piggies become sexually mature when they are just a few weeks of age.

Make sure to take good care of your pregnant guinea pigs and consult a vet so that everything goes smoothly.

Find the piglets a good home!