Rats and guinea pigs are usually housed in the same section of the pet store. Does that mean that guinea pigs and rats can live together?

Despite their physical similarities and many characteristics, rats and guinea pigs shouldn’t share the same habitat. These two species are completely incompatible and cannot be friends. Besides, never place guinea pigs, not even temporarily, in the same cage with other animals, including small animals such as rats, hamsters, and rabbits.

The truth is that we believe that many animals (especially predators and prey animals) cannot live together. Still, there are exceptions because each animal has its own personality. Also, some pets that appear to be similar cannot get along and be friends.

There are reasons why cats and guinea pigs cannot be friends. Also, there are other reasons why you shouldn’t let your piggies run free around dogs.

But every pet owner has a story about an unlikely pairing between two distinctly different pets. However, responsible owners consider size, health risks, energy level, and temperament before allowing the two species to play freely in the same room.

Nonetheless, first, consider natural factors before assuming that you can and should house guinea pigs and rats in the same cage.

Can a Guinea Pig Live With Rats?

Unlike many other pets, guinea pigs should never be kept together with other species, including small animals such as rats, hamsters, and rabbits. Guinea pigs are extremely sensitive and can easily be hurt. Other animals can easily cause them a serious injury.

Allowing pets to have a closely supervised encounter is not the same as allowing a rat and a guinea pig to share the same cage. Depending on the personalities of your pets, a safe introduction through cage bars can satisfy one pet’s curiosity about the other in the room. However, making rats and guinea pigs roommates is not a good idea. 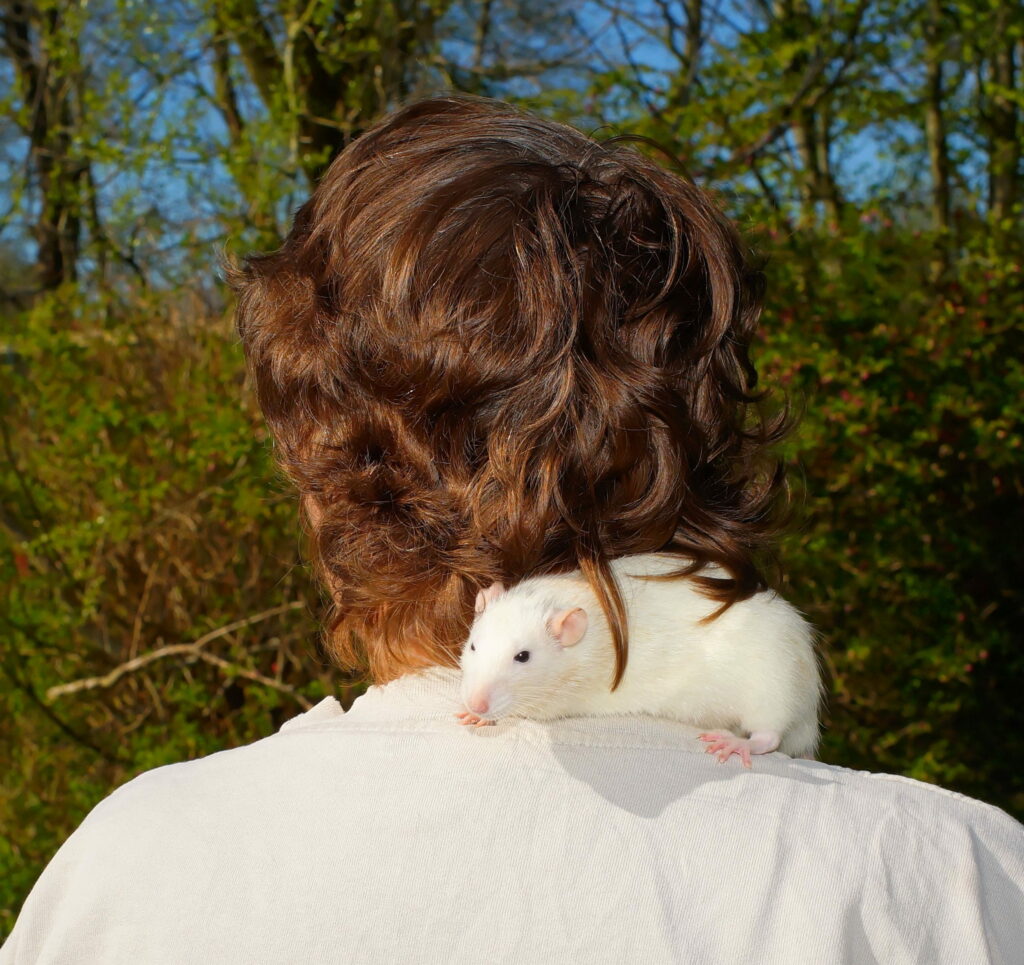 Rats are highly intelligent, inquisitive, interactive, and social animals. That’s why many people would say that pet rats are just perfect pets.

Owning a pet rat can bring much fun into your life.

They are easy to care for.

You can teach them to come when called and to perform tricks.

They are easy to handle and affectionate. Also, they will rarely bite if socialized at a young age and treated gently. Rats are good family pets, but you should never leave them alone with small children.

Rats are extremely intelligent and have excellent memories.

They can recognize other rats and humans they have seen earlier, and once they learn a path, they won’t forget it.

Pet rats frequently use a specific corner to mark their territory, so they are simple to toilet train. All you need is a ferret-sized litter tray. Fill it with a different material than that on their floor. Using paper cat litter is perfect for potty training a rat.

Here’s one fascinating fact: according to University of Tokyo research, rats have one of the best-known noses, with 1,207 olfactory receptor genes (elephants have 1,948, humans 396, and dogs have 811 olfactory receptors).

And here’s another fascinating fact: rats communicate at a higher frequency than humans, at around 50 kilohertz or higher. 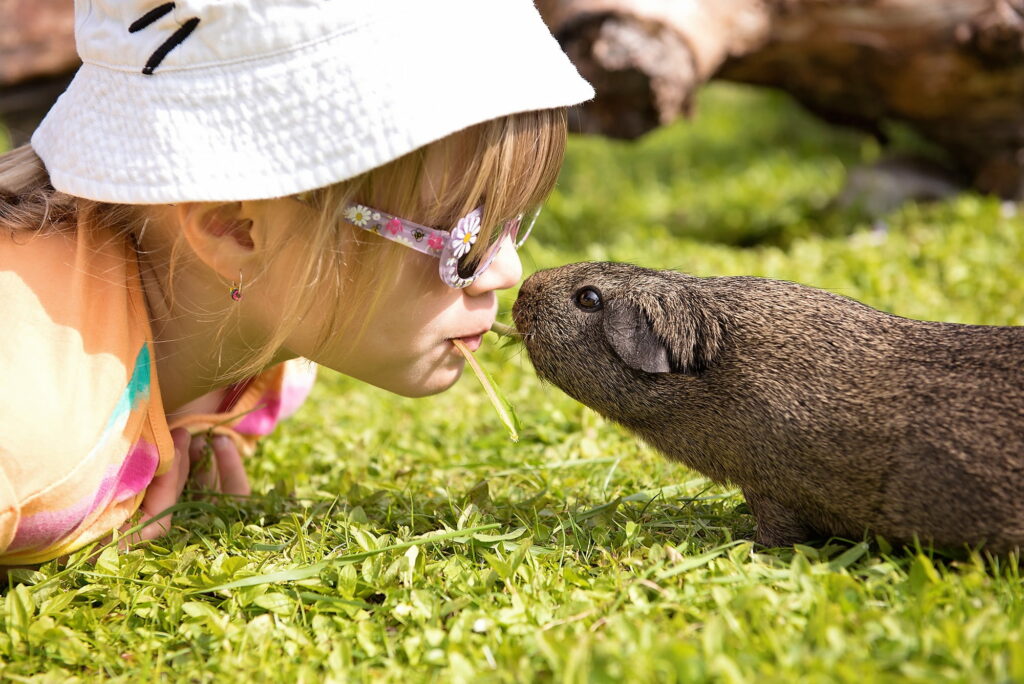 Guinea pigs are also social animals who require interactions with other guinea pigs. They don’t need other animals to be happy for having company, but they do need the company of the same species (which means, piggies need only other guinea pigs).

Guinea pigs bond to their owners and to other members of their species.

Here are a few interesting things about guinea pigs that you should know before getting this cute furry animal.

One of the biggest reasons why you shouldn’t house guinea pigs and rats in the same cage is the difference in their diets.

What Are the Similarities Between Rats and Guinea Pigs?

Rats and guinea pigs are both social (herd) animals who should live with others of their own species.

Despite their social nature and the need for company, guinea pigs and rats are territorial. It’s best to raise two or more baby rats together and two or more guinea pigs. However, be careful about the choice of gender in a group because guinea pigs can fight for dominance if more than one male exists in the habitat.

Rats and guinea pigs could easily fight for territory. Both species need room to exercise according to their energy, which is not the same for these small animals. A rat has the need to climb and explore. In contrast, guinea pigs cannot climb, although they are also explorers.

All pet rodents have incisors (front teeth) that grow throughout their lives. Upper front teeth are longer than lower incisors (about a 1:3 ratio). Overgrown front teeth are a common problem both in rats and guinea pigs, but if you provide your pets with pieces of wood and other chew toys you can avoid this problem. Molars (cheek teeth) do not grow indefinitely. 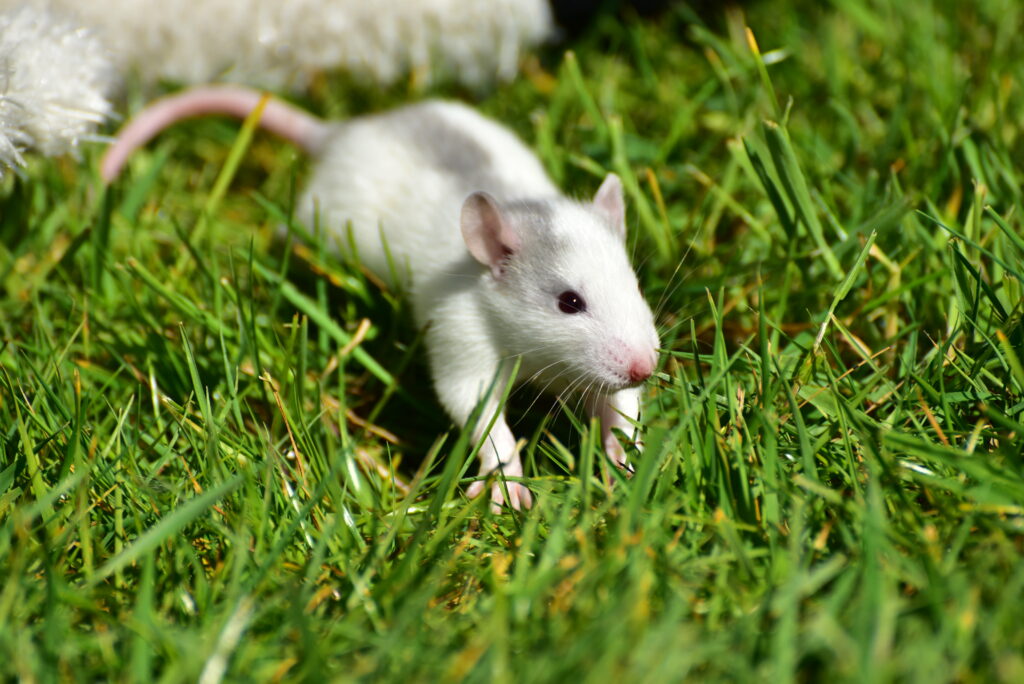 What Are the Differences Between Rats and Guinea Pigs?

Guinea pigs are herbivores, and they need an ambulance of hay, vegetables, fruits, and pellets to be healthy.

Rats shouldn’t eat hay. Rats are omnivores, which basically means they eat anything, including meat (so, yes, a rat can easily eat a guinea pig). For that reason, pellets for rats contain meat.

As climbers, rats need a multilevel cage with lots of things to play with and entertain them. Guinea pigs are happy and safe in a single or double-level cage. Rats need secure cages with tightly spaced bars, as they can run away. Piggies don’t need tight spacebars.

If a rat and guinea pig get into a fight, the guinea pig will probably lose (die). In a fight, rats are much more aggressive and dangerous due to their massive teeth/claws. Guinea pigs, as prey animals in the wild, rely on speed and hiding to survive.

Guinea pigs need outdoor time but you cannot take rats outside to roam free. They escape.

Rats can attack and kill guinea pigs. Rats can fit through the smallest holes and gaps due to their body shape. Their bodies are long and flexible, allowing them to squeeze into spaces much smaller than themselves.

Wild rats can get into the hutches of guinea pigs kept outside and kill them. There have even been reports of domestic rats attacking and killing adult and baby guinea pigs. It is critical that your cavies are safe from them.

Although rats and guinea pigs share many similarities, they are too different to keep them together in the same cage.

If there were a fight between a rat and a guinea pig, the rat would win and could even kill a guinea pig and eat it.

As a responsible pet owner, you will care for your pets and ensure their safety from all harm.